You are at:Home»Analysis»Spiking The Punch During the Dance
With Zach Spiker’s name regularly being mentioned as part of Drexel’s coaching search, Ryan Koechig took to some research on the candidate. Here is some back story on one of the members of Drexel’s “Short List”:

There would be no arguing if you were to think of the current state of the Drexel men’s basketball program as being the same as the Black Knight in Monty Python’s Holy Grail after his fight with King Arthur. 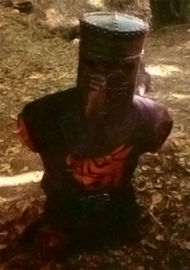 I will find any reason to make a Monty Python reference

Conference defections, losses, injuries and a plunge in attendance seem to have the program limbless on the ground and watching as all of the other programs in the CAA pass us by. New arenas, new practice facilities, new coaches or even new conferences have greeted rivals both new and old in recent years, while Drexel has remained relatively unchanged. So, if you’re Drexel Director of Athletics Eric Zillmer, who do you look towards to help put your Black Knight back together?

How about another Black Knight?

A few weeks ago, as the proverbial writing seemed to be on the wall pointing towards a change, a group made the leap to analyze the staffs of a number of schools searching for potential replacements. You can go back and read the list of 21 potentials here. Every name that is on that list is from a school that has played in the NCAA tournament at some point in their history. So it would seem an odd choice to turn the sites for candidate 22 to one of the five original programs to have never made it to the NCAA Tournament. Those five are The Citadel, St. Francis (NY), Northwestern, our friends the pantsless Griffins of William and Mary and The United States Military Academy at West Point. One of those schools happens to be the Black Knights, and I’m writing this to introduce you to their head coach.

When you think of a head coach producing program, the first one to come to mind is probably not Army (it’s probably not in the top fifty). However, two coaches you’ve probably heard of have roamed the sidelines as coach of the then Cadets: Bob Knight and Mike Krzyzewski. With that in mind, let’s take a look at their current coach, Zach Spiker. If you’ve been paying attention online, you would have seen his name pop up as a potential candidate to succeed Bruiser Flint over the weekend. He has just completed his seventh season at the helm in West Point after taking over from recently dismissed St. Louis coach Jim Crews after he was dismissed at Army and found a landing spot on Rick Majerus’ Billiken staff. Over those seven years, Spiker has amassed an overall record of 102-111 and a Patriot League record of 45-65, while never finishing the regular season higher than fourth and with no postseason appearances of any kind. You are now probably a bit upset that I’ve made you read about 450 words leading up to a coach who has a losing record, but let’s dig a little deeper.

The final season of Coach K’s stint as Army’s head coach was the 1979-80 season. He finished his fifth season with a record of 9-17. Since that year, Army has finished .500 or better only four times. Zach Spiker has been the coach for three of them, and they’ve all occurred in the last four years. Army has had only three seasons where they finished the Patriot League regular season with a .500 or better record since joining the league for the 1990-91 season. Zach Spiker is the coach that has accomplished that as well. Three coaches in Army history have won 65 or more games in their first five seasons as coach, Bob Knight, Mike Krzyzewski and Zach Spiker. Spiker has led the Black Knights to 15 or more wins four years in a row. That’s the first time that’s happened for the program since a run from 1920-1924. He’s done this at a school that holds its athletes to standards that are even higher than what they would be here at Drexel while also dealing with the Academic Index of the Patriot League. So while the overall and conference records may not be as impressive as you may want, the success he’s had in a very difficult location for coaches is impressive.

Spiker, 39 (he’ll be 40 by the time next season starts), is a 2000 graduate of Ithaca College where he was a member of the basketball team. After graduation, he immediately began his coaching career as a graduate assistant under current Wichita St. coach Gregg Marshall at Winthrop University. He spent two seasons in Rock Hill, S.C. with each one ending in a trip to the NCAA Tournament. Spiker then moved on to West Virginia University where he was an administrative assistant under current Michigan coach John Beilein. His responsibilities with the Mountaineers included on-campus recruiting visits, postgame film development and opposition scouting. WVU was invited to the NIT in his second and final year there, in which he also was awarded his master’s degree in sport management. Spiker returned to Ithaca, New York in 2004 joining the staff at Cornell under the leadership of current Penn coach Steve Donahue. His time as an assistant saw a huge turnaround of the Cornell program. As one of the lead recruiters, the Big Red would win three consecutive Ivy League titles (the third was after Spiker left to coach Army) and the automatic bid to the NCAA Tournament that came with them. Cornell became the first school that wasn’t Penn or Princeton to accomplish a three-peat. Cornell would also set season program marks for wins, points, three point field goals and blocks during his time there. Spiker would leave Ithaca for West Point after five seasons and Cornell posting a 50-20 Ivy League record in that time frame.

Spiker’s hiring at Army did not follow the conventional former “Coach is fired at end of year and a new guy is brought in shortly after” timeline. Jim Crews had just signed a contract over the summer to remain the Black Knights’ coach. However, a confrontation with a player led to Crews being removed on September 24, just a few weeks before the beginning of the 2009-10 season. A phone call from Steve Donahue to Army AD Kevin Anderson to recommend his top assistant for the Army position ultimately led to Spiker signing a six-year deal for his first head coaching gig. From his now former boss:

“Zach has an incredible work ethic,” Donahue said. “He’s willing to put in the time. I think a lot of guys in this business think recruiting is making a big splash and being dynamic in a setting. … In reality it’s the guy that’s going to develop relationships over time through hard work, and really fulfilling all the things he talks about with the coaches and the families, and Zach does a great job of staying on top of kids and making them realize he’s there for them. He did that for us time and again.”
http://cornellbasketball.blogspot.com/2009/10/local-news-on-zach-spiker-departure.html

The question that really matters most is what could Drexel expect from a Coach Spiker led squad? That limbless Black Knight used as a metaphor for the Drexel program would need to regenerate some legs, because it’s going to run. Army has run at a top 75 Tempo in the country every year, save his first, that Coach Spiker has been in charge, reaching as high as 10th for the 2014-15 season. The Dragons will also need to regenerate their arms as stats show they will be jacking up a lot more three point attempts. Army has finished in the top 60 in the nation in terms of percentage of shots taken behind the arc every year, again, except for Spiker’s first year. All of this has resulted in a program that ranked 317th in offensive scoring per game his first season, to one that has now ranked in the top 100 for three of the last four seasons. The increase in scoring has been accomplished by an effective field goal percentage that has generally ranked in the top half of the country helped by ball movement that has seen the Black Knights with an assist rate consistently in the mid to upper 50’s. That’s important. It’s a big piece that DU has been missing, and it’s a key indicator of a well run offense.

There are some concerns with Coach Spiker, which is to be expected when looking for a replacement at Drexel’s level. It will be very important for Dr. Zillmer to decide whether these concerns are a function of the school and conference that Spiker coaches in or whether these are defects that will need to be addressed in the hiring of a potential staff of assistants. Chief among these concerns is that of the Black Knights’ defensive play. Jim Crews had gotten Army to being a top 100 defensive efficiency program while the offense lagged far behind. The top 100 ranking held during Spiker’s first season, but then saw it fall to where it bounced between the low to higher 200s. Perhaps this was a function of the aforementioned school/conference, however, looking at the same stat adjusted for only Patriot League play shows that Army has finished an average of 6th during the Spiker regime. That would seem to imply that the issue is with either the players that can be brought into Army being limited, or this being a deficiency in his coaching ability. This most recent season saw the team’s defensive efficiency settle at 197, the second season in a row that this metric has improved. Should Spiker end up the hire, there would be no way of knowing whether these last two years were the makings of a trend or just a couple year blip.

Another concern is on the offensive end. While it is true that the Black Knights have been one of the better scoring teams since Coach Spiker took over, the efficiency at which they have scored has not been all that great. Five of his seven years have seen Army’s offensive efficiency rank between 245-335 nationally. The two better years were 2012-13 and 2013-14 where they ranked 120th and 175th respectively. Again, looking at this metric adjusted for only Patriot League play, Army has an average offensive efficiency rank of 6.6. The main reason for this disconnect would appear to be due to the Black Knights turning the ball over on roughly 20% of their possessions. Another potential issue is their very low free throw rate not allowing them to pick up free points, which is likely correlated to the abundance of three point attempts his teams take. They haven’t gone inside enough to be fouled at a regular clip, which may be coach, but is just as likely due to the normally undersized Army squads.

All in all, Zach Spiker is a very intriguing candidate for head coach of the Drexel Men’s Basketball program. He would definitely appear to be a complete 180 from the Bruiser Flint Era in terms of tempo and defensive prowess. A contract extension he signed with Army prior to the 2013-14 season and lasting through the 2017-18 season would need to be addressed, but if he has emerged as one of the lead candidates, it would appear to be a minor issue. While he has definitely had some success in a difficult coaching situation, there would be a risk in assuming that some of the red flags that were discussed would be mitigated by his moving to a conference that should be able to attract more talented players. Depending on who would round out his coaching staff, it could be a risk very much worth taking. If anything, his hire would add another level of intrigue in the Battle of 33rd Street as Spiker would be going up versus his mentor and former boss in Steve Donahue.

This site uses Akismet to reduce spam. Learn how your comment data is processed.